The most casual followers of the Argentine debt saga will be familiar with the Latin term pari passu, or “equal footing” – or, in this case, equal payment to all holders of Argentine bonds, whether or not those holders took part in the country’s two restructuring programmes in 2005 and 2010 following its 2001 default.

Now Russ Dallen of Caracas Capital Markets, a veteran commentator on and broker in Latin America’s most exotic bond markets, has introduced another smattering of Latin to the story: pacta sunt servanda, or “contracts are for keeping”.

That’s what Dallen wrote to investors on Thursday as the basket of defaulted Argentina bonds, bought by Dallen for clients last year when they were trading for 30 something cents on the dollar, rose through the mid 80s to reach a bid price of 90 cents on the dollar.

This from his note:

While Argentina rails and nashes their teeth at the injustice of it all, the US courts in the end are simply enforcing contract law; and like it or not, Argentina wrote bad contracts (or good contracts, depending on which side of the litigation fence you are on).

There are about $3bn worth of untendered Argentine debt – bonds that did not take part in the restructuring – including about $1.3bn held by investors who have sued Argentina in the US (because the bonds were written under US law), led by Paul Singer’s NML Capital. 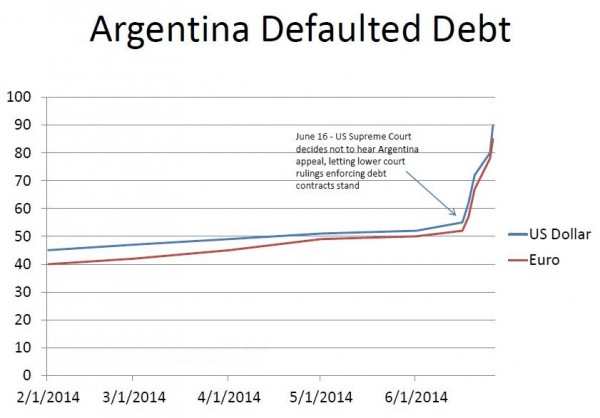 The defaulted bonds have shot up in value since the US Supreme Court refused on June 16 to overturn previous rulings that ordered Buenos Aires to pay the holdouts according to the contracts on their bonds. They are now, says Dallen, approaching face value.

But what if the contracts really are for keeping?

There are many different instruments in the bundles traded generically as defaulted Argentine debt. In a normal bond market, bonds are traded with interest: a bond that pays interest every six months will rise in price over the course of each six month period in accordance with the amount of due interest accrued. Argentine defaulted bonds are traded without interest, on the assumption that no interest will be paid.

However, if the contracts are enforced as written, that could change dramatically in bond holders’ favour: they would get not only 100 cents on the dollar but also the amount of interest unpaid since the default nearly 13 years ago, which could typically double or triple the bonds’ face value.

Might that happen? It just might. The prospect would certainly tend to push the price of the bonds up rather than down. And it would add to what Dallen says is an extreme mismatch between people now clamouring to buy the bonds and those willing to sell.

“It may well be that Argentina is buying the bonds back,” he says. “It would make sense and it would certainly be the cheapest solution for them, especially if they will have to pay a multiple.”

Argentina’s best course of action now would appear to be to negotiate in good faithwith the holdouts. It may well be able to settle for less than the full amount in the bonds’ contracts. Says Dallen, who got his law degrees from Christchurch College Oxford and Nottingham University in the UK and Columbia Law School in the US: “The first thing they teach you on both sides of the Atlantic is pacta sunt servanda. Then they teach you how to get out of it.”